Oh hey there…that’s right I still have a blog! Let’s just start off by letting you know…things for our computers have been kind of rough this year. Seb’s charging cable first started dying right when we got to Chile last year and it took about 5 weeks for the new one to get here. So he used my cable while we waited. The new cable also broke, as did the next one and the one after that. My cable also died and I’ve been without a computer since about May. MAY!! We finally broke down and bought a new laptop but even that wasn’t just buying a new laptop. The store accidentally switched our desired 8G laptop for a 4G and it was a slight nightmare getting our money back. Yadda yadda yadda…we have a working laptop!

So. Excuses aside I’d like to resume posting about Castro! Yay! Really, you guys didn’t miss much. The winter here is awful. I’ll just say it. The rain just does not stop. The people are still great, but the weather makes you never want to leave your house and it’s a total downer. But! SUMMER has arrived! And summer is awesome here!

I thought I’d talk a bit about the main open air market in town, called Feria Yumbel. I love markets like this! In Vietnam, we lived a block away from one and I was always afraid my camera wo

uld get stolen so I never took any pics haha. You don’t have to worry about that in Castro though.

The market is right on the water and is the best place to buy seafood and veggies. It’s best to go early, but if you know us Karlssons…you know we don’t do early. But it closes around 5pm so go before then.

Let’s start with the seafood, mariscos baby! We love oysters and we always go to the same oyster guy here. Rodrigo was one of our first friends at the market and he always gives us a good price. I don’t think I can order overpriced oysters in a restaurant again…we can get 30 here for 3,000clp, which is like $4.50USD!!  They also have an assortment of fish and usually a few items we have never seen. 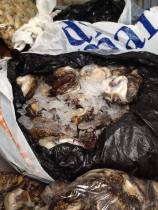 There’s this thing called Piure (top left pic)?? Looks straight up NASTY ! But we hear it’s nice in soups haha. Not sure what the bottom left pic is either…some sort of shellfish thing?? On the right we have Rodrigo next to his stall at Feria Yumbel.

Castro is a fishing community so you will find a lot of fish there! Mostly salmon and one called Merluza, which is Hake (and delicious). Sometimes they have seabass but once again, you have to be that early bird, and it doesn’t quite work for us night owls. There’s also clams, mussels, sea urchin, octopus! They make ceviche out of just about anything but my favorite is the clam one…who knew “raw” clams were so delicious!? 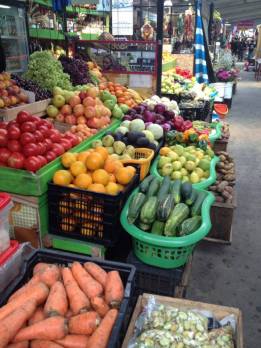 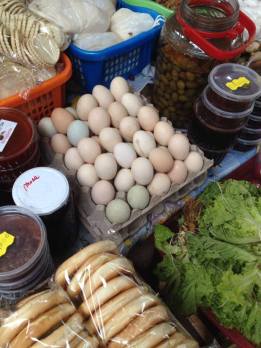 I just love the colors of the market! Everything is so fresh! Did you know Chiloe has over 400 varieties of native potatoes!? FOUR HUNDRED! So you’d think they’d be just giving potatoes away with this surplus, but actually, they are one of the most expensive items for us behind meat and booze. We’ve paid around 7000clp ($10.50ish) for a small bag! They are delicious though! MMM!

Another thing we love to buy at the market is farm-fresh cheese! There is a delightful woman we get our cheese from and she always remembers us, and even if we are just passing her stall, she still waves and greets us warmly. The cheese she sells is unique and it’s also quite a good price; 1.125 kilos for 5000clp (around 2.5pounds for $7.50USD). I wish we would have gotten her name! She’s so sweet!

And finally, one of my ultimate favorite things to buy….YARN!! Yeah, I’m not ashamed…I LOVE KNITTING AND CROCHETING! And I love the yarns here. Here at the market, there are rows of all natural, 100% wool. Some of the wools feel like they are right off the sheep! 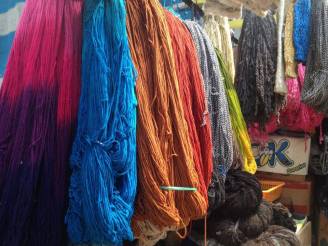 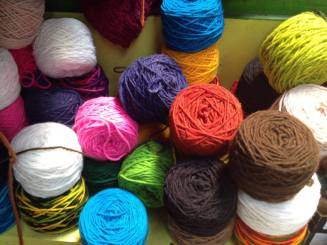 Haha, which sounds uh, quite rustic! I’m not really sure about price, because normally I just go for it if I see a yarn I love.

So that’s Feria Yumbel of Castro, Chiloe, Chile! There are also a bunch of little ferias that pop up every now and again and those are fun to go to as well. There was one in Nercon that had THE best cheese! The man selling it to us looked suspiciously similar to Santa Clause. We also were able to find shallots there, and we haven’t found them since. So hitting up the pop-up markets or the weekly ferias is a good idea. We’ve learned that if you see something you like, grab it, because you may never see it around again!

This site uses Akismet to reduce spam. Learn how your comment data is processed.